↓
You are here Home > Fields of Fury by James M McPherson

“Gods and Generals” .. First Battle of Bull Run, Antietam, Fredericksburg and Battle of Chancellorsville on DVD 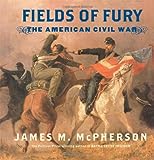 The acclaimed Fields of Fury by James M McPherson shows the reader the history of the most known Civil War battles. Generals who know little of strategy and tactics fail while their opponents revel in the benefits of their victories.

Read how the north is pushed to the brink of peace talks due to their tremendous and costly losses from the initial southern victories that left Robert E Lee feeling his army was nearly invincible.

The author starts with the decade before the war and the life of fear and violence that was bleeding Kansas as a free state.

But the slavery issue continues and the belief and fight for states rights will begin and continue far longer than the grieving mothers of soldier husbands and sons ever wished for.

A great book for all ages especially for young readers with its detailed descriptions of battles as well as many photographs taken by the Civil War photographers we know such as Brady and Sullivan.